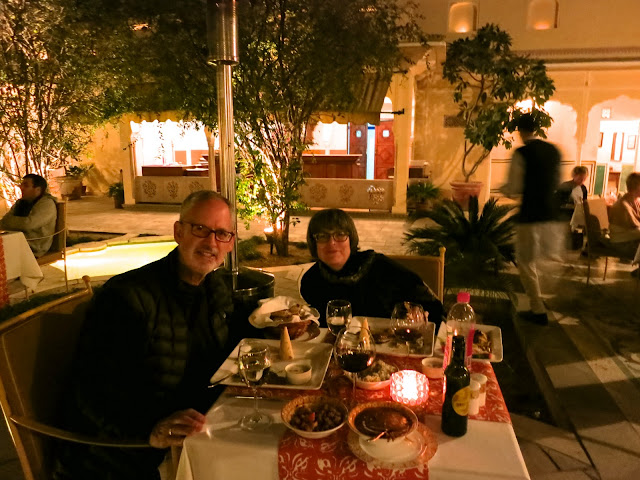 After the 5 days of the Jaipur Literary Festival we had one more day in Jaipur. We spent it shopping and returning to the Jantar Mantar Observatory. This is a park like enclosure adjacent to the still functioning palace, where the Maharaja of Jaipur still lives. The park is filled with gigantic stone instruments that could precisely measure the stars, and sky. There was a time when the Muslim culture was the center of mathematics, astronomy and science in general and Jaipur and this observatory was one of the great centers of learning. Each instrument is explained, however, one can’t quite conceive of how it works. It makes no difference, just seeing them as modern sculptures is quite enough.

Jaipur is known as the pink city. Almost all of the buildings are uniformly painted pink. The infrastructure is haphazard. One never walks on the sidewalks without looking for missing pieces and obstructions and holes. The traffic is a mess, especially within the walls of the old city. Monkeys scamper on scaffolds and rooftops. This is the capital of the State of Rajasthan. This is also a great center of learning, with many universities. It is a shopper’s paradise: famous for its jewels, and textiles. Ferris and Courtney are in the South of India and asked us to pick up some things. We went to a jewelry store and described what they were looking for. The owner, Mohan, pulled out his cell phone and showed us a picture he had taken of us from when we were in his store 2 years ago. I guess we were valued clients. After photos of potential pieces were taken and emailed to the women in South India, selections were made and it fell once again on me to get the owner Mohan, to sharpen his pencil. Perhaps the art of bargaining stems from the well of the general Indian tendency to be argumentative, but as I write these words I realize I might have the order reversed and augmenting sprung from the art of bargaining. Whatever! They excel at both.

Most of the buildings have the name of the store written on them in Hindi. Because we can read Hindi we enjoy reading the signs, trying to figure out how the word is pronounced and finally trying to translate it. Our driver and guide loves to help us and is very surprised that we have learned to read the language. We still (and probably never will be able to speak it in a conversation mode – they speak it way to fast for us to understand or converse). We do however have a small but useful vocabulary including the key bargaining phrase: Dam Kam Karo (lower your price).

We have been eating mostly vegetarian meals, not because we have any ethical or health concerns but because the vegetarian cooking is so damn good! We had a Cauliflower (Gobi) dish today for lunch today at a small restaurant that was fantastic.

We returned to our Haveli, I had a massage and we packed up. Tomorrow morning we leave Jaipur and head towards the Rajasthan desert. I suspect they won’t have Internet and this might be the last blog for a few days. Maybe they will – Inshallah as they say.

I write these words at 5am after we were awakened by the sound of the call to prayer. We love the sound of the call to prayer coming from dozens of mosques that are within our hearing. It is like a short symphony sung in many voices and cadences. It is part of the soundtrack of India (along with cars honking, cows mooing, Bollywood songs, bicycle bells and people bargaining).
Posted by Cliff at 5:59 PM