From Lemons to Lemonaid 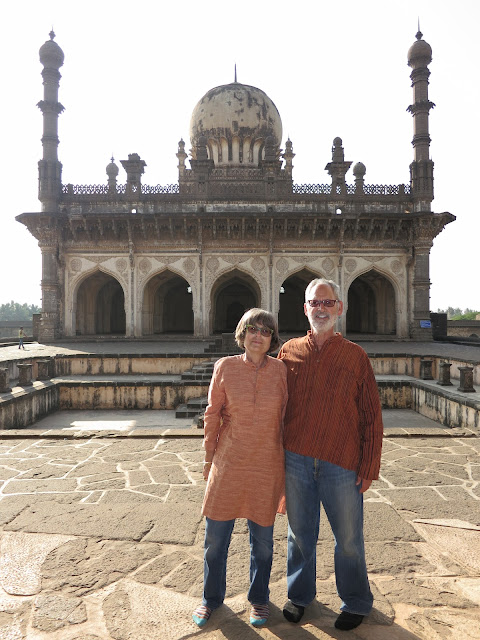 I have never had to do this before. I am writing this in April of 2016. Last night I was looking at the blog of our India Trip in 2012 wanting to show someone about our adventures in Bijapur a city located in the South of India. I was surprised to see if that there were some pictures of Bijapur but NO text. The whole reason that we write the blog is so that we can remember what we did on our vacations. I have a poor memory to begin with and the blog is essential to bring back our experiences.

Bijapur is an exception to my memory failings. Some memories are so vivid and wonderful you can close your eyes and reconstruct with amazing details events long past. Bijapur is the counter example. It was so awful, it is seared into my brain. I am sure the wretchedness of our experience is why I didn’t bother to write about it, but now with hindsight I feel compelled to recount our adventure.

We were travelling with Courtney and Ferris. As we approached the Muslim city of Bijapur we could see the enormous ugly Gol Gumbaz (a tomb of one of the Mughal Kings). The structure has the largest dome in India. It also has the most hideous dome in India. The structure looks like a giant dirigible hanger. It is famous for its echoing capabilities. We climbed to the top where we experienced the echoes. Most of them sounded to us like they were saying: “God is the place ugly”.

There is a fort and other tombs structures that we visited. The structures looked totally wrong and out of place in Southern India. But there they were, reminding us all that once great swathes of India were ruled by Muslim Kings. The city itself was filthy and dirty. Our hotel was the best hotel in town. In was horrible. The first floor restaurant was filthy, we were afraid to eat there, and only had toast. Our bed linens were so dirty Cathy refused to take her clothes off when we eventually went to bed. The shower was so decrepit that we neither showered nor brushed our teeth.

We desperately wanted a drink, but being a Muslim town there were no bars or liquor stores. The hotel told us of a private place near us where we could purchase alcohol. We went over to it and felt like we were in a bad movie. The place was dark and slightly scary, definitely a backroom private affair. All we could do was buy a warm bottle of Russian Lemon Vodka that we took to our filthy room and glumly drank.

I asked Ferris for her recollections. Here is her response.

Courtney and I entered our hotel room to find that the dirty, torn sheets did not have any blanket covering them and the filthy bathroom included what looked like shit smeared inside and out of the bathtub. We asked for blankets and clean towels, but nothing that resembled "clean" ever appeared; and we slept fitfully for that one night, avoiding going to the bathroom as much as possible

The restaurant next to the hotel where we were told to eat was a step down from the street level. The open windows allowed the dirt covering the roads to be blown onto the tables, chairs and floors. When we asked for glasses, we saw that we could not trust that anything, including the food, was safe to eat. At one point, I, spoke to a woman worker there. She stared at me silently and with a sullen look. I thought perhaps my greeting was not heard or understood. When our tour guide appeared I mentioned to her what had transpired. She told me that I had spoken to an "untouchable" and that the worker probably was shocked that someone, especially a Western tourist, addressed her. I was surprised to hear this and then realized I had no clue how to identify this woman worker as a member of that caste. Clearly I had a lot to learn.

We all realized that the city of Bijapur did not really yet have a tourist infrastructure. We were slated to go to another town the next day that was even less likely to have accommodations with clean amenities. It was then that we decided to decamp Bijapur, skip the next destination, and drive immediately to Hyderabad.